The hauntings of Charing village 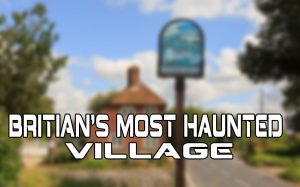 Pluckley, a small village in the county of Kent in England, is well known as the most haunted place in the UK. However, just a couple of miles down the road and sitting in a valley is the historic village of Charing. My family lived there for many years and as a lad I heard many tales of the various hauntings in the village. Charing has been an inhabited village for over a thousand years, and most of the buildings date back at least two hundred years, many of them are very much older, some dating to the early Tudor period or before.  Many of the houses still have spells against witchcraft carved into the oak mantle beams, or painted onto the walls.

The village has always been important as a pilgrim rest on the long walk from Winchester to Canterbury and even has an Archbishops palace, once used by the Archbishops as a stopping off point on the journey to London. I remember hearing of the local ghosts from older folk in the village, some of whom had actually experienced them themselves. Sadly, most of the people who live there now have little to do with village life, it is now just a pleasant place to be when not working in London. When I left there were around a dozen shops in the village, they have almost all closed, leaving just a general store, news agent, butchers and post office.

One of the most interesting ghosts concerned a Tudor house close to the junction with the A20 road and across the road from the village hall, which itself is also haunted. The old house was used around two hundred years ago as a kind of orphanage for small children. The owner of the house would take them in and recieve a small amount from the local alms to provide for them. The children lived at the top of the house in a large room with just a small window, the house has hardly changed and the window can still be seen. One of the reasons that Charing became an important village was the easy access to good drinking water, several of the houses still have wells inside.

The black and white Tudor house had its own well which was around twenty feet deep, and a bucket was used to lift the water. This is what led to the houses most persistent ghost. While lifting water, the owner of the house dropped a bucket down the well and though he used a hook and rope, was not able to retrieve it. He decided to force one of the small girls down the well to collect the bucket, and lowered her down. The loop that he had made in the rope for her to stand in gave way and she plunged down the well. Within an hour or two a wild rainstorm hit the village. The man had not seeked help with trying to save the girl and she drowned in the well. The torrential rain brought the level of the water up overnight and the girls body floated up.

When he next opened the well cover, the house owner found the body and decided to make the death look like an accident. He transferred the body to a large pond just a short distance away, and placed a hoop and stick next to the body, to make it look as though the girl had died after falling into the pond while playing. He told local people and the other children that she had wandered off and that he had not seen her for a few days, to cover up the accident. The body was quickly found and at first he was believed.

Within a week or so, muffled cries could be heard from the side of the house where the well was, and then the ghost started to make its appearance. Apparently it is seen as a small child of about five years old, soaking wet and encrusted by pond weed. It is said to appear during the late summer months, at both the pond, which still exists although now private and behind a high fence, but much more often at the house, often being seen in the summer twilight hovering above the well, or staring fixedly from the upper window. The house owner was found guilty of neglect and the death of the girl and was imprisoned for many years. The house suffered during this time and the foundations sank into the sand, leaving the house as it is now, leaning to one side and giving it a sad and unloved look.

The village hall across the road has its own contingent of ghosts, it was used as a small hospital for soldiers during World War 1. A plauque in the porch commemorates those lost. A nurse and also a tall man wearing part of a soldiers uniform are sometimes seen, and the smell of cigarettes is often noticed, although smoking in the hall has been banned for many years.  The local church yard also has a erie aspect. Generally it is very well kept, although part of it is very neglected with the graves and stones overgrown, I was told that spirits had been seen here in the form of strange lights and mists under the trees.

It is worth having a look here, as the headstones are actually quite interesting, many of the also having the added small headstones for babies and children. The churchyard also has a large headstone giving the life story of a soldier who fought in the American war of Independence and elsewhere. Should you venture to Charing, take a walk along the haunted bridleway which joins Pett lane to the old Pilgrims way. My dogs would never even enter this place, and I have felt the presence of unseen eyes following me along. It is said that robbers from the manor of Wickens would raid parties of pilgrims here, stealing what etyver they had and murdering those who resisted.

These are just a few of the local stories that I remember from my childhood, there are several more as well as many from around the local villages. The area has a rich history, but these days not many people know or can relate the old tales and legends. I often think of the village and how it has changed from being a small close community to a middle class dormitory for commuters. Apparently it no longer has even a pub, although I suspect the various ghosts are still going strong.